Interior lights:          Adjacent to the west wall in cupboard.

Information:              Originally a 12th c church, it is now much changed due to extensions over the centuries and the loss of the interior in major fire during 1908; it was caused by sparks from a heating stove which reduced the building to a shell.  A full scale restoration was carried-out by raising £5,500 from insurance, public subscription and gifts, the interior you see today is from that refurbishment.  The use of light oak gives the nave a welcoming and warm feel; there is plenty of Mouseman work to be seen here; pews, and the organ surround all carry the rodent; the pulpit and rood screen are also of a very full and hansom appearance.

The Norman, nave door surround has a fine order of mouldings; the west tower was built in the 16th c and has a peel of six; the vestry is also an addition from that time and includes a priest’s chamber above it (used for lodging), but is not accessible.

The church was the centre of village life; it was used for social activities and a place for conducting business, the Moot Cross in the churchyard was regularly used by the wardens and overseers of the township for their meetings.  The church was also used as a ecclesiastical courthouse; records from the 17th c show that in St Andrew’s case it was dealing with such matters as; unmarried mothers, adulterers and Catholics, one assumes that this authority has since been rescinded.

It is interesting to note that through-out medieval Briton the nave was financed and maintained by the congregation (hence, it’s varied uses), while the Chancel was the responsibility of the ecclesiastics, so more often than not, funded by the lithe tax.

In the south wall of the chancel is an example of what are often described as a Lepers Window; they are said to have been used for the disbursements of charity, but this has been put under question as lepers would not have been allowed to approach populated areas, any such unfortunate souls would have been restricted to the edge of the village and rejected by society; these windows are not uncommon but their true purpose is very much subject to speculation.

N.B. There is a very good butchers at the other end of this village. 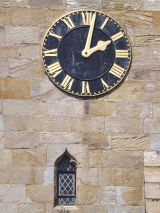 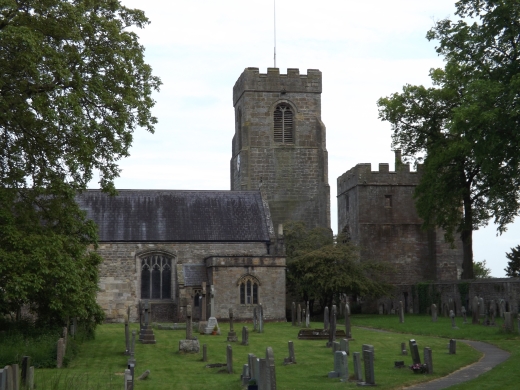 Wheelchair access:  Good; one step down to the nave and one step up onto the chancel.

Information: This church is in beautiful location on the bank of the River Ure, its origins are in the 13th c, but (unfortunately) was very heavily restored by the Victorians in 1859/60, it has made it difficult to pick out some of the earlier features, so please refer to diagram of the original layout plan.  The builder was instructed to recycle some of the materials; the original mullions can be seen in the windows of the South wall; the north isle is as it was from a 15th c restoration.  The double tomb of John and Elizabeth Marmion can to be found here, it has a wrought iron hearse surmounted by candle holders which gives it a dramatic appearance, it is believed to be a unique feature.  There is some graffiti on the tomb which is rather irreverent to say the least.

Other points of interest are; the Victorian lych perambulator in the nave, a pair of X framed Mouseman chairs on the chancel; also the grave of General Sir William Bell CB, who served at the Battle of Waterloo; it is located in the churchyard near to the north wall.

Just a few yards to the south west of the church is the lovely limestone built Marmion Tower with it’s oriel; it is of the 14th c and was originally the gate to a manor house which, unsurprisingly, was was built for the Marmion family; the house was gone by the 16th c.  The tower past through the hands of several families before being taken over by English Heritage in the 1970’s; it is now a grade 1 listed building. Although small, it is an interesting place to visit and open to the public daily;- April to Sept; 10 am – 6 pm and Oct to March; 10 am – 4 pm. Access is along Church Street. 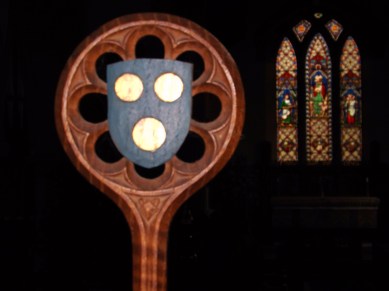 Wheelchair access:  Good; double churchyard gate and a step into the nave.

Information:             This lovely church, tucked away at the top left hand corner of the town square (admittedly, not a village) is of fine appearance with plenty going for it.  Built on the site of a Saxon church, there is still evidence of that period in the west wall of the tower in the form of quoins (large corner stones) that hark back to it’s origins; it also gets a mention in the doomsday book.  The building is 1140 A.D. with additions from the 13th to 15th c.  The octagonal Perpendicular spire you see today replaced an original wooden broach spire that was lead covered.  It is believed that the tower was used in defence of attacks by the Reivers (boarder raiders, 13th – 17th c).  The clerestory was added around 1450, while the south porch is of the 16th c.

The largest monument inside is that of Sir Marmalade and Lady Wyville; note that he is portrayed with his eyes open while she has hers closed, it is understood that this was a decorative device used to denote that she predeceased him.

Other points of interest are a Mouseman table and communion rail; also the work of noted stained glass maker, Harry Stammers of York is evident in a north aisle window; it depicts St George slaying the dragon.  The churchyard is very large and pleasant to wander around; there is the remains of a Saxon Paulinus preaching cross of the 8th – 9th c near the south door which must have been of considerable proportions to require such a large base.

Masham is a lovely place to visit and can easily take up a half day to enjoy the ambience and atmosphere of this unspoilt town at the very bottom of Wensleydale.

Note; this is the home of Theakstons and Black Sheep Breweries, a beer lovers delight. For further information; www.theakstons.co.uk/Visitors/Daytime-Tours

Another one of Miss Hartley’s

Refreshments:          Cafés at both car parks or Ripon: Pub; The One Eyed Rat (recommended, entirely based on the name, and a few good reviews)  http://www.oneeyedrat.com

Information:             Set on an elevated position within the grounds of the deer park, this church was built to a Gothic Revival design in 1870/78 by architect William Burges who was also building Christ The Consoler at Newby at that time; the similarities are striking.  The outwards appearance is very grand; the dramatic 45 ft broach spire has flying buttresses and louvred belfry windows.

Inside, a great deal of marble and ashlar freestone has been used along with much stained glass to give plenty of colour, particularly on a bright day.  The Chancel is very heavily decorated; the golden dome has a rich appearance; the heavy brass door to the vestry was a gift from Burges.  Detailing through-out the whole church is of the highest quality.  The spiral staircase, which is used to maintain the organ pipes, makes a novel feature (no public access).

The St George chapel in the south east corner of the nave was added in 1907 for the interment of the Marquess and Marchioness of Ripon who had funded the building of this wonderful church.

A stone carving of a mouse (looking suspiciously ratty like) is to be found in the S.E. corner of the chapel on a stone dado rail, also that of a snail is in the adjacent corner, it is believed that they where carved at the instruction of William Burges, but the reason why is not known.

The church is maintained to a high standard and well worth the short walk from either car park.  There are guide cards for your use at the nave entrance and the knowledgeable N.T. staff are on hand to assist and answer any questions.

Walking the grounds of the deer park by the River Skell is very pleasant (and is free); it is also a lovely spot for a picnic.

The N.T./English Heritage Fountains Abbey is is a fantastic place to visit and will likely take a full day-out to to get the full benefit of all that is on offer; for details please visit – www.nationaltrust.org.uk/fountains-abbey-and-studley-royal-water-garden 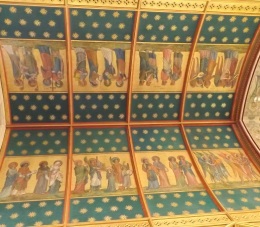 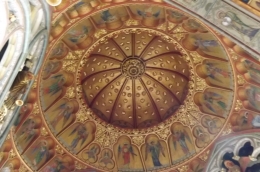 Welcome to Yorkshire Village Church Drives. This site has been created to encourage people to explore the wonderful countryside in this part of England. Read More.